A national holiday and held annually on October 12. 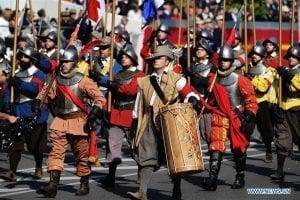 This date commemorates the anniversary of Christopher Columbus’ landing in the New World on October 12, 1492. It is also known as Columbus Day in the United States and as Día de la Raza in various Latin American countries. Celebration of the anniversary dates back to 1935 in Spain, when the first festival was held in Madrid. Back then, the holiday was known as Día de la Hispanidad, emphasizing Spain’s connection to Hispanidad, the international Hispanic community.

Several changes were made to the name and date, one of which was by royal decree on November 27, 1981 to establish Día de la Hispanidad as a national holiday. Then on October 7, 1987 the name was changed to Fiesta Nacional.

Since 2000, October 12 has also been Spain’s Day of the Armed Forces, celebrated each year with a military parade only in Madrid. This is generally overshadowed by the feast of Our Lady of Pilar, whose feast day falls also on October 12.

More from our suitcase

Fireworks, Snap, Crackle, Pop, Valencia on Fire Duration: 5 daysWhere: Valencia The long awaited Las Fallas is finally being celebrated in Valencia, Spain starting September 1 to 5. COVID-19 had certainly put a damper on this fiery event and after a loooong year, it’s...

END_OF_DOCUMENT_TOKEN_TO_BE_REPLACED

Pros and Cons of Moving to Valencia, Spain

Valencia is one of the best picks you can make for moving abroad. Like anywhere, there are drawbacks …

END_OF_DOCUMENT_TOKEN_TO_BE_REPLACED

You can find out more about which cookies we are using or switch them off in settings.

This website uses cookies so that we can provide you with the best user experience possible. Cookie information is stored in your browser and performs functions such as recognising you when you return to our website and helping our team to understand which sections of the website you find most interesting and useful.

Strictly Necessary Cookie should be enabled at all times so that we can save your preferences for cookie settings.

If you disable this cookie, we will not be able to save your preferences. This means that every time you visit this website you will need to enable or disable cookies again.