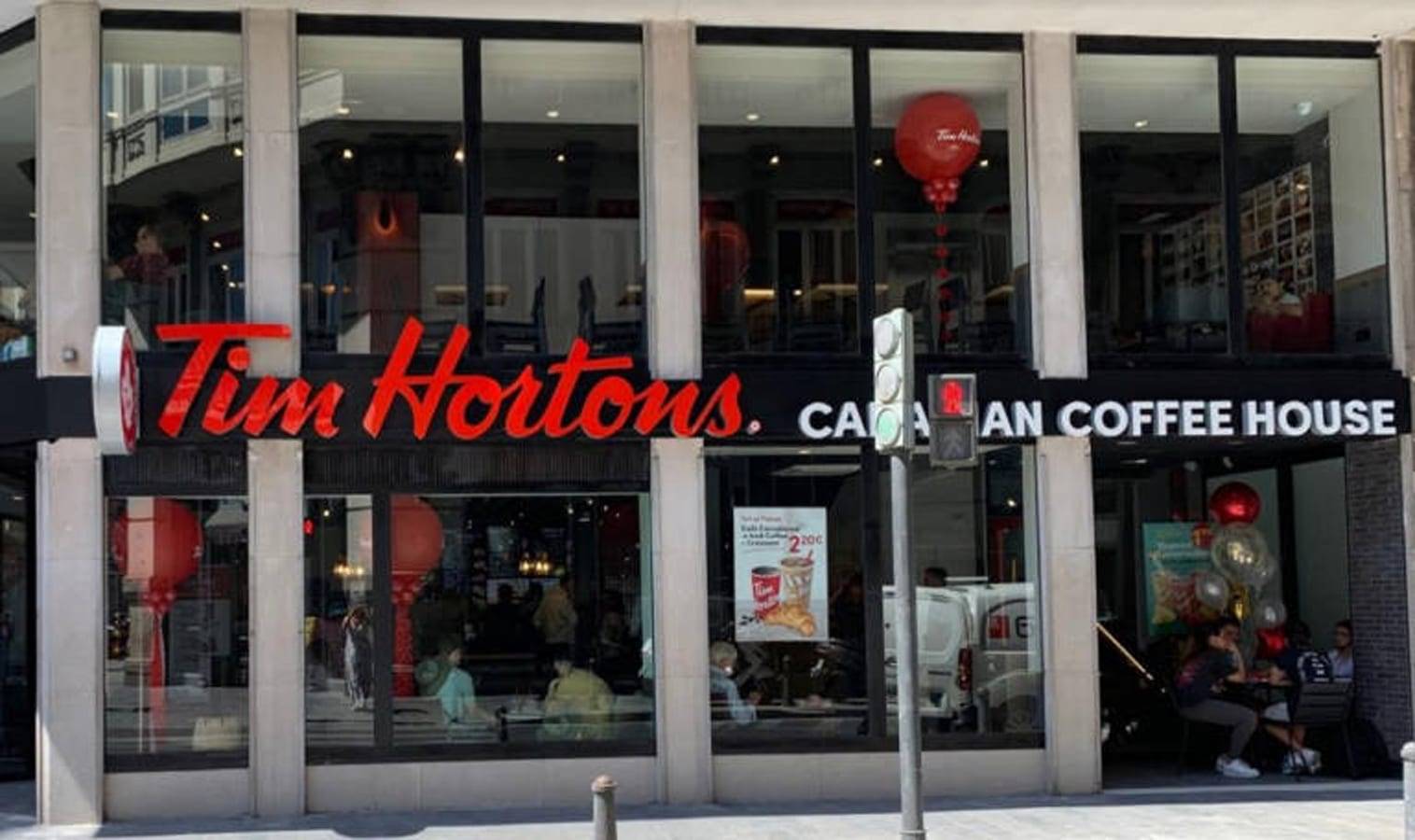 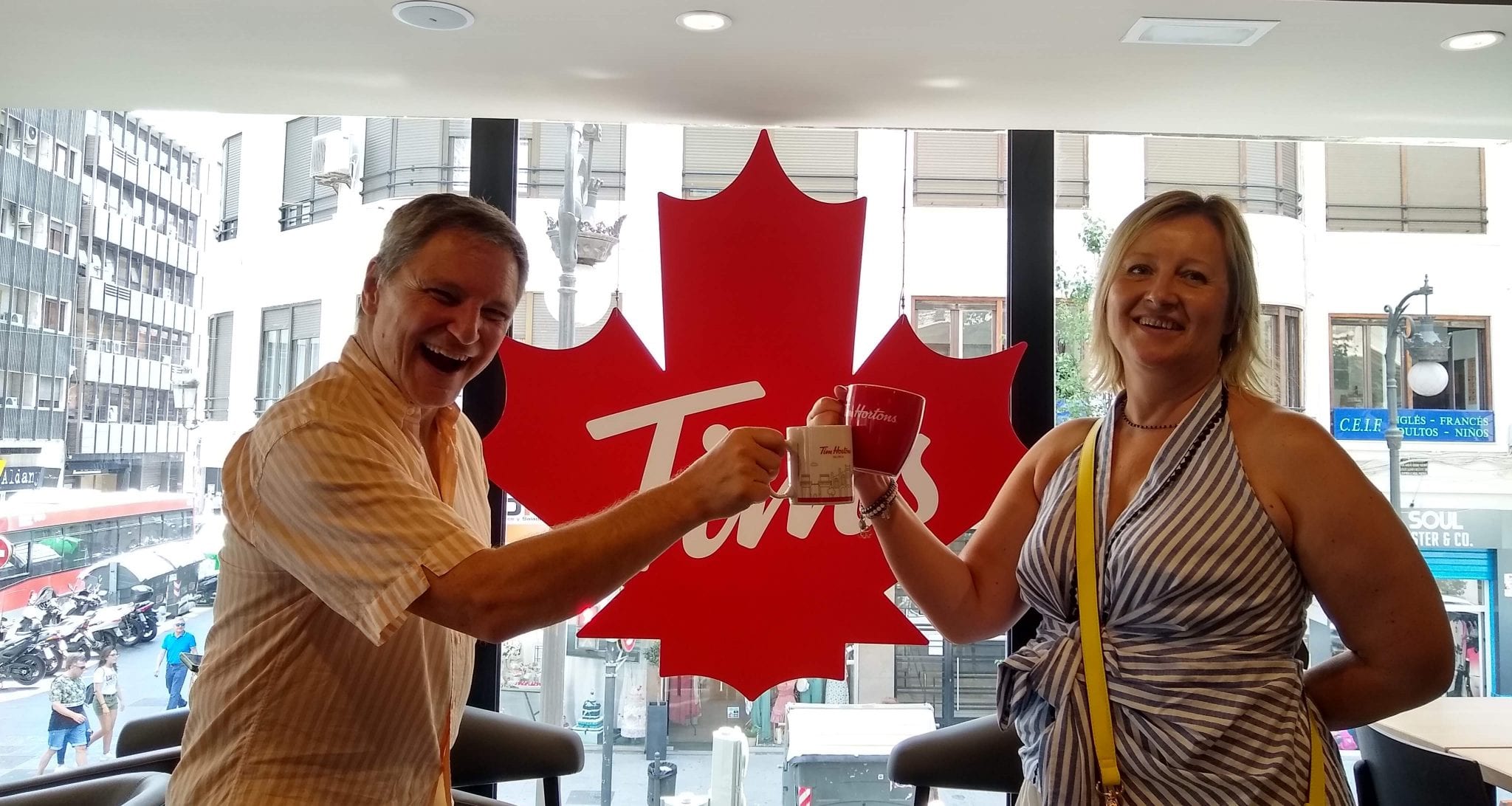 2 of the winners of Canada Trivia

Sadly, Tim Hortons is permanently closed in Valencia. This happend sometime during lockdown in the first quarter of 2020.

What is Canada Day?

On July 1, 1867, Canada became a self-governing dominion of Great Britain and a federation of four provinces: Nova Scotia; New Brunswick; Ontario; and Quebec. It was called Dominion Day until 1982 and since 1983 is now officially known as Canada Day.

Since moving to Spain, we really never celebrated Canada Day as there wasn’t much that reminds us of Canada. Then, surprise, surprise on June 17, 2019, a brand spanking new Tim Hortons opened in the center of Valencia. Thanks to a collaboration between Tim Hortons, and Postcards from Valencia, we were able to invite some of the folks in Valencia to help us celebrate.

Who was Tim Horton?

Miles Gilbert “Tim” Horton (January 12, 1930 – February 21, 1974) was a Canadian professional hockey defenceman from Cochrane, Ontario. “Tim Horton Donuts” was opened on May 17, 1964, in Hamilton, Ontario; later abbreviated to “Tim Horton’s”, then changed to “Tim Hortons” (minus the possessive apostrophe).

We LOVE the concept of having a less expensive alternative to Starbucks, which happens to be across the street. At Tim Hortons, you can buy lattes (hot or iced), cappuccinos, café mochas, donuts of course (it’s what they are known for internationally) and other sandwich-type of food.

If you need a cool and quiet retreat to get away from the summer heat of Valencia, head on over to the 2nd floor at Tim Hortons where you will have plenty of space to hang out and relax or if you’re a digital nomad, a great place to work, along with cold drinks and some food.

The staff is wonderfully attentive and friendly.

Everyone who joined us for Canada Day enjoyed tasting a cup of “Canadian” coffee, ate some famous Timbits (aka donut holes – each flavor was delicious and no one could really decide on the best flavor) and played Canada Trivia (Tim Hortons supplied the prizes!)

So, if you’re in the center of Valencia and have a hankering for a cuppa joe, stop by Tim Hortons, eh. We highly recommend it!

You can find out more about which cookies we are using or switch them off in settings.

This website uses cookies so that we can provide you with the best user experience possible. Cookie information is stored in your browser and performs functions such as recognising you when you return to our website and helping our team to understand which sections of the website you find most interesting and useful.

Strictly Necessary Cookie should be enabled at all times so that we can save your preferences for cookie settings.

If you disable this cookie, we will not be able to save your preferences. This means that every time you visit this website you will need to enable or disable cookies again.